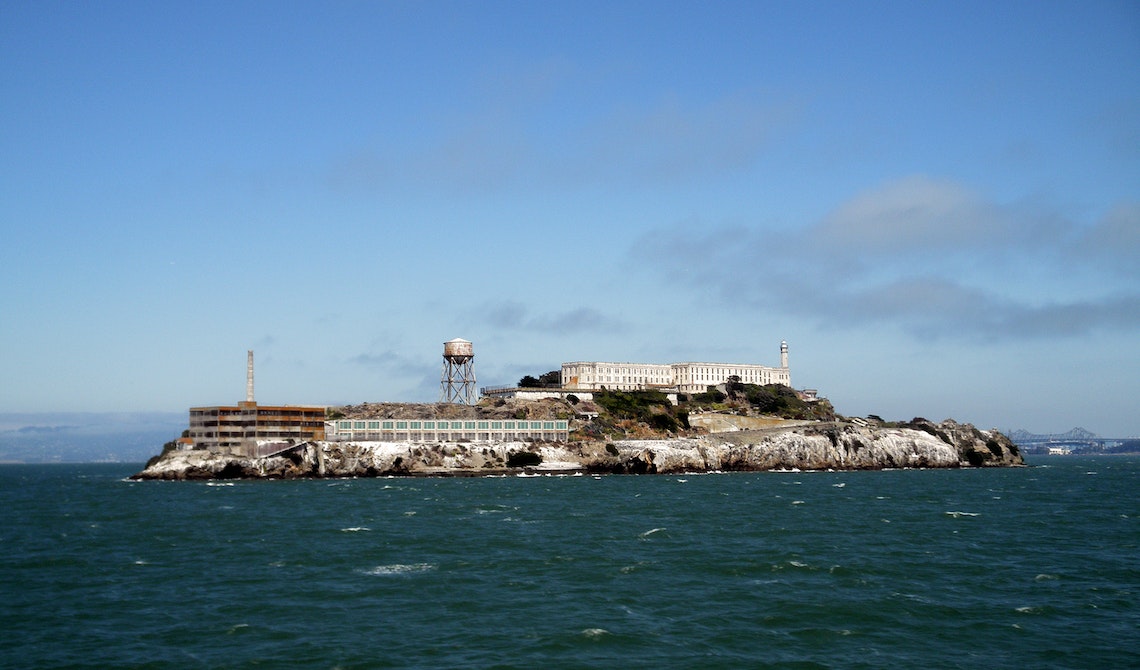 Did you know that in 2019 alone, 2,231 prisoners escaped state or federal prisons in the United States? However, among the famous prison escapes in recent history was the infamous Alcatraz prison break, where three inmates managed to escape prison security and were never found.

Who were the three people who successfully escaped Alcatraz? How did they escape, and have they been caught?

This article will answer these questions, along with information about the prisoner’s plans, what happened after their escape, and possible theories confirming their successful escape and their life in Brazil.

If you are looking for more information about any inmates currently incarcerated in one of the 7,000 U.S. correctional facilities, visit LookUpInmate.org. You can access prisoner records and needed information for setting up prison calls, visits, and other inmate-related concerns.

Alcatraz Island prison, also known simply as Alcatraz, is a solitary island in the middle of San Francisco Bay.

This prison is also sometimes called “The Rock” and was already holding prisoners since the Civil War.

However, in 1934, Alcatraz was renovated into the world’s most secure prison and held prisoners from the U.S. government’s war on crime.

Al Capone and George “Machine Gun” Kelly were among the famous crime figures imprisoned in Alcatraz.

Alcatraz was deemed the most secure prison in the world because of its remote location. It was an island surrounded by rough waters, which made escape almost impossible.

However, even the secure island fortress is not enough to stop three men from escaping and never being found again.

How Many People Have Escaped Alcatraz?

During its 29 years of service, Alcatraz housed approximately 1,545 inmates. Many prisoners tried to escape the island, but only three managed to flee Alcatraz and were never found.

The following are some of the people who tried to escape Alcatraz. Most of them were eventually caught, while some died trying.

Only 3 People Have Ever Escaped Alcatraz: The Escapees

In the history of Alcatraz penitentiary, only three people have ever escaped the Rock. They were Frank Morris, John Anglin, and his brother Clarence Anglin. Alcatraz housed all three inmates in 1961.

The three prisoners were arrested due to several bank robbery cases in 1962. When they reached Alcatraz, they were already well acquainted with each other, which started their collaboration.

The three prisoners planned their escape for eight months. It was an elaborate plan that required them to build tools inside a secret workshop they made inside the prison.

By June 11, 1962, their preparations were complete, and so sprung their escape.

The three convicts were always missing early on June 12, 1962. They used dummy heads tucked in their beds to fool corrections officers that they were still sleeping in their cell blocks.

When the guards discovered that the inmates had escaped, the entire island prison went into lockdown, and a comprehensive search commenced to find them.

After discovering the escape of three convicts from Alcatraz, a nationwide investigation started to check their records.

Offices all over the country searched the files of the three inmates, and all returned with records of attempted escapes from prison.

After two days, investigators found a packet of letters about the escapees sealed in rubber. Later on, other items were discovered, like paddle-like wood pieces and a homemade lifevest. Investigators did extended searches, but nothing more was found.

Piecing Together the Plan

The FBI found evidence through a collaboration with the Coast Guard and the Federal Bureau of Prisons. The authorities pieced together the prisoners’ escape plan.

Here are some of the plans the FBI discovered about the escapees from Alcatraz prison.

According to the investigation, the three inmates started carrying out their plan on June 11, 1962.

They gathered their equipment, climbed through the vents towards the prison roof, went down the bakery smoke stack, climbed over its fence, went straight to the island’s northern shore, and escaped the island through their improvised rafts.

They planned to head to Angel Island, navigate through the strong currents of San Francisco Bay, cross Racoon strait, and land in Marin County.

Was the Escape From Alcatraz Successful?

The FBI revealed that Frank Morris and the Anglin brothers successfully made the most daring prison breaks of all time.

In 1962, the three vanished from the penitentiary and remain missing to this day.

The escape stumped investigators and historians for decades, as there were indications that they managed to flee entirely.

The detectives recovered no bodies, which is surprising given the choppy San Francisco Bay currents around Alcatraz.

After the escape, many historians and even the FBI concluded that the escapees did not make it back to safety. In 1979 the FBI closed its investigations on this case after they deemed it unlikely that the three survived the treacherous and frigid waters in San Francisco Bay.

However, in January 2018, an article with an excerpt of a letter addressed to the FBI by a man named John Anglin was published by CBS San Francisco.

The letter contained the name, John Anglin. He said he was an escapee from Alcatraz in June 1962 and is now 83 years old and in “bad shape.”

The letter also showed that all three barely made it out of Alcatraz.

San Francisco Police Department Richmond Station received this letter in 2013 but kept it hidden during the investigation.

The letter was tested for fingerprints and DNA, and detectives even analyzed the handwriting, but the results were inconclusive.

The Mystery Continues: Did They Ever Find the Alcatraz Escapees?

Many people maintain that the three did escape, and it was wrong for the FBI to pronounce them dead and close the case. In 1962, members of the Anglin family claimed they had received postcards from the two Anglin brothers who escaped.

The mother of the Anglin brothers is also said to have received flowers from anonymous senders every year up until she passed away in 1973.

During the funeral, family members allegedly saw two tall men wearing makeup, which they believed were John and Clarence Anglin in disguise.

Sightings of the Anglin brothers were also prevalent in 1989. Some people even contacted programs such as Unsolved Mysteries to report what they supposedly saw.

Reports about the three men’s supposed escape came from the inmate’s immediate families. People outside their clans also reported seeing the men.

In 1962, Bud White came forward, claiming to be Frank Morris’ cousin. White admitted that Morris employed him to bribe corrections officers in Alcatraz. However, his story does not end there.

He further reported meeting Morris in a park in San Diego days after the escape. White’s daughter later said she was present in his dad’s meeting with Morris, but no evidence backed up their story.

Other sightings were even covered by TV shows like America’s Most Wanted. A former Alcatraz inmate, Thomas Kent, revealed that he helped plan the escape but did not go with the three because he could not swim.

He also told the show that the girlfriend of one of the Anglin brothers picked up the three and brought them to Mexico. The story received skepticism as the show paid Kent to reveal his confession.

Another shocking confession came from John Leroy Kelly. He admitted that he killed the three inmates to keep the money the Morris and Anglin families put up.

He admitted this information on his deathbed, saying he pocketed the $40,000 that he was supposed to give the three. Kelly also provided the presumed location where he buried the bodies.

However, a search over the area revealed no remains.

FEDs Still Looking for Alcatraz Fugitives in Their 90s

After 60 years, the Alcatraz escape case is still kept alive by unresolved questions and the what-ifs spurred by the occasional claims of sightings made through the years.

Recently, U.S. Marshals have released a digitally aged photo of the three escapees of what they might look like today. The fugitives should now be in their 90s.

The U.S. Marshals Service received the case after the FBI turned it over to them after they hit a dead end.

The Enduring Mystery of the Three Missing Men of Alcatraz

After the U.S. Marshals got the case from the FBI, they have kept it open until today.

In 2012, the media covered the Alcatraz escape’s 50th anniversary, which caused renewed attention to the case.

With the help of his brother, Widner collaborated with the History Channel to make a documentary about the escape. He unveiled the photo, which was allegedly taken in 1992 by a man named Fred Brizzi, who was a family friend.

Ken Widner claimed and theorized that the two Anglin brothers went to Brazil after their escape and became farmers.

He also believed that Clarence and his brother John Anglin were sending a message through the photograph telling their loved ones that they were doing well but could not return home.

The Widner photo received intense speculation because of its grainy resolution and that both men in the picture were wearing sunglasses, making facial recognition nearly impossible.

Michael Dyke, retired U.S. Marshals deputy, stated that he has doubts about the photo as it was not consistent with the physical characteristics he saw in the original booking pictures of the escapees.

According to Dyke, the Anglin brothers had long arms and fingers, which are not present in the Brazil photo.

He added that features such as arm and finger length are unlikely to change with age. This fact made him conclude that the people in the Brazilian photo were not the Anglin brothers.

Dyke worked on the case for 17 years and said that the three did not survive the night of the escape and probably got washed off into the ocean.

In 2018, the U.S. Marshals Service released an age-progressed photo of the three Alcatraz escapees using modern digital photography software. The photos estimate the possible features of the three in their 90s.

Though many in law enforcement believe that the three most likely died during the night they escaped, the mystery of the three escapees still churns people’s imaginations.

Aside from the photos, the FBI unveiled 3D models of the dummies that the three made to deceive the correctional officers in Alcatraz of their escape.

1. Who escaped from Alcatraz in real life?

Only three people who escaped Alcatraz were not apprehended until today. However, many escape attempts from this island prison failed.

Here are some names who tried their luck in escaping the Rock.

Barker and Stamphill refused to surrender and got shot, while the rest did not put up a fight.

2. Did the authorities ever find Alcatraz escapees?

According to official Federal Bureau of Investigation records, the three escapees were not found and are presumed dead. However, the case is still open after being transferred to the U.S. Marshals Service.

3. Who were the three that escaped from Alcatraz?

The three people who escaped Alcatraz were Frank Morris, John Anglin, and his brother Clarence Anglin.