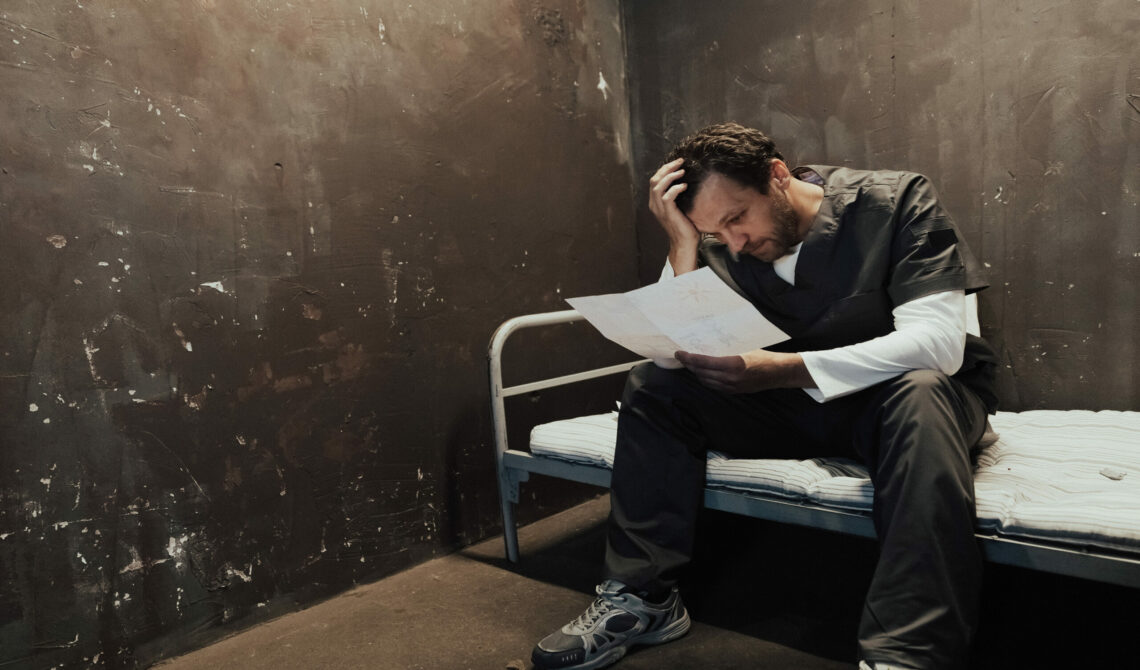 A 2021 publication by the U.S. Department of Justice stated that two-thirds of state prison inmates served less than two years in jail before their initial release. Among these offenders, one in 23 convicted of violent crimes served 20 years or more.

Different offenses have varying sentences, such as fines or community service for lighter violations and imprisonment for serious ones.

How long do prisoners spend their time in jail? Do inmates sentenced to life imprisonment remain locked up for the rest of their lives? What can inmates do if there is a calculation error in their jail time?

Lookupinmate.org addresses these questions and provides details on sentencing alternatives. This article also explains whether or not conviction results in imprisonment and how different correctional facilities calculate jail time.

How Much Jail Time Do Prisoners Serve?

According to research by the Department of Justice’s Bureau of Justice Statistics, inmates released from state prison in 2018 spent an average of 2.7 years behind bars.

The same study mentioned that individuals guilty of murder served a median of 17.5 years, while those convicted of drug possession were kept in prison for about nine months.

Individuals convicted of violent crimes were confined for longer prison terms, and those with offenses involving property and drug spent shorter periods.

How Is Jail Time Determined in the U.S.?

Judges usually consider multiple factors in determining the appropriate sentence for an offender. These factors can include:

In cases wherein the judge has the discretion to decide the sentence, the defense gives numerous factual circumstances that can help convince the judge to lower the sentence.

Examples of such circumstances, known as mitigating factors, are expressed below:

In contrast to mitigating circumstances, aggravating situations compel the judge to assign a heavier sentence to the offender.

Examples of aggravating factors include:

Is One Year in Jail Long?

One year may be sufficient for certain offenses depending on the mitigating or aggravating factors.

In 2018, offenders convicted of property crimes such as larceny, motor vehicle theft, and fraud spent a median of 11 months in prison.

Meanwhile, individuals locked up for public order offenses like driving under the influence (DUIs), court offenses, or liquor law violations were detained for a median of 12 months.

Other crimes require jail time of more than one year. For example, burglary can land an offender in prison for a median of 17 months, and negligent manslaughter can run up to 3.7 years.

Is Life Sentence in Jail 20 Years?

A life sentence is an imprisonment for crimes wherein convicted individuals remain behind bars for the rest of their natural lives or until pardoned, paroled, or lowered to a fixed prison term.

Depending on the state’s laws, a defendant serving a life sentence can qualify for parole (early release with conditions) after a set period, such as 20, 25, or 40 years. Defendants serving the minimum sentence can apply to a parole board for a conditional release.

Is There Mandatory Prison Time?

Some states have mandatory sentences limiting a judge’s discretion in dispensing punishment.

State legislatures implement mandatory sentencing laws in response to the public’s desire to end judicial leniency and treat all individuals who break the same law equally.

In Virginia, some crimes have a mandatory minimum prison sentence to which a judge must convict the offender. Individuals sentenced to mandatory prison time must serve in prison or jail.

In some states, offenders cannot reduce their minimum prison time for good behavior. For instance, common crimes with mandatory minimum prison sentences in Virginia include the following:

The state’s Department of Corrections is usually responsible for calculating jail time. However, other agencies, such as a state’s sheriff’s department, can determine jail time for individuals convicted of a misdemeanor.

Under Virginia law, the sheriff requires inmates to serve 50% of their sentences unless a mandatory minimum sentence applies for that offender’s crime. In some correctional facilities, prisoners serve 50% of the misdemeanor sentence on the condition of good behavior.

Some states require the local sheriff’s department to calculate an inmate’s prison time if the offender’s felony sentence is less than a year.

For sentences exceeding one year, the state’s Department of Corrections will determine the inmate’s time and release date.

Differences in How Jail Time Is Calculated

Various jails have different methods to calculate jail time, down to the month or number of days, making the accuracy of such calculations challenging to ascertain.

For example, one county jail may use calendar days to calculate an inmate’s time in confinement. Another prison may calculate jail time based on a 24-hour day.

In the first scenario, an individual incarcerated at 3:00 pm would have served the first day of their jail sentence at midnight. However, in the second case, the inmate must be confined until 3:00 pm the next day to be considered to have spent a whole day in prison.

Do You Get Credit for Time Served?

Individuals serving sentences that include prison time will only serve 50% of the conviction if the Department of Corrections determines that the inmate behaves well in custody and deserves good time credit.

In certain states, offenders convicted of a crime within the jurisdiction can qualify for credit for serving time. If an individual gets arrested in another jurisdiction, they will not get time credit while waiting for extradition.

Does a Conviction Always Result in Jail Time or Prison?

However, some criminal cases, such as misdemeanors or felony convictions, do not necessarily result in serving time behind bars. Other forms of punishment include a fine, probation, or community service.

Do you know someone serving time in prison? Search their jail location and criminal records at lookupinmate.org. This nationwide online inmate records checker lets you look for incarcerated individuals serving jail time in any state or federal prison facility throughout the United States.

What Should You Do if You Believe There Is an Error in Your Jail Time Calculations?

Inmates should understand how the correctional facility they are detained calculates jail time to ensure that they do not spend more time in prison than required under their sentence.

Often, prisoners discover that they do not receive the proper credit for their time in jail, resulting in delayed release dates. In this case, these inmates can take steps to have the error corrected.

For example, New York state prison inmates with missing jail time credit for the time they served should contact the clerk of the jail where the inmates were last housed in the city system.

Individuals with questions about their jail time or who believe there is an error in their time calculation should seek help from an experienced criminal defense attorney or law firm.

What Is Alternative Sentencing?

Alternative sentencing refers to any sentence type that is not outright incarceration. Thus, probation, community service, and restitution fall under this category.

These alternative sentences are available depending on jurisdiction:

What Crimes Are Eligible for Alternative Sentencing?

Sentencing alternatives were initially for first-time offenders and minor offenses. However, more options have become available for career criminals and felons.

For instance, offenders with a drug addiction problem may be sent to drug or treatment courts. Other alternatives involve addressing driving violations, teen gun violence, and mental health issues.

In most cases, violent crimes like sexual assault or murder are not eligible for alternative sentencing.

Other Types of Sentencing Alternatives

Courts can assign eligible offenders to the following sentencing alternatives:

Probation is a suspended sentence that stays on hold as long as the defendant complies with the court’s conditions. The suspended prison or jail time acts as the offender’s incentive to complete the probation terms successfully.

Judges in most jurisdictions require a defendant to serve a short prison time before allowing the suspension to go into effect. This condition, typically known as shock probation, gives defendants an early feel of incarceration to hopefully deter them from committing probation violations.

For serious crimes or where the offender has a criminal record, judges often combine fines with other punishments, such as probation, incarceration, and community service.

Judges can require defendants to pay restitution to the victims or a state restitution fund. The court can also require offenders to return or replace damaged or stolen property, compensate victims for medical and psychological treatment expenses, or pay funeral costs if the victim dies.

Defendants sentenced to community service must perform unpaid work to repay society for committing the offense.

Examples of community service work include:

This sentencing alternative can help restore the offender’s standing in society and benefit the community.

Treatment courts comprise a team of experts providing intensive programming and supervision for the defendant.

This team typically consists of a judge, prosecutor, probation officer, defense attorney, counselor, and social worker. These professionals work together to identify and resolve the defendant’s underlying circumstances leading to their criminal behavior.

Some jurisdictions may require the accused to plead guilty before gaining program eligibility. The judge decides whether the offender gets accepted into the program.

Defendants may avoid jail and criminal conviction through a pretrial diversion program, which can redirect them from the criminal justice system to supervised probation or release.

A diversion program for drug-related offenses can include the following:

In a deferred adjudication, a judge defers or refrains from adjudicating the case or entering a conviction. The defendant does not need to render jail time and instead serves their sentences in the community.

After the offender completes the diversion or deferred adjudication successfully, the judge typically dismisses the case, or the prosecutor drops the criminal charges.

Searching for an imprisoned loved one, friend, or colleague can be time-consuming, especially with more than a million inmates in over 7,000 U.S. correctional facilities. Through lookupinmate.org’s user-friendly online inmate search platform, you can look for the inmate records you need.